Application Performance Monitoring - Back to the Future

In my previous post Application Monitoring - Past, Present and Future I touched on my desire to see Application Performance Monitoring (APM) vendors add log aggregation and analytics to their service offerings. I’d like to offer further suggestions into what I would like to see in future APM offerings.

The design and function of APM solutions is relatively simple and straightforward to implement. Typically, there exists some form of “Agent” running on the node under observation that relays data to a “Collector”. The “Collector” then stores the data on some form of storage solution. The data is then inspected and presented to a number of services including those that provide functions such as:

Let’s not consider the actual data that is being collected other than say it should include all data relevant to application health. Notwithstanding the omission of log data stated earlier, APM solutions from companies such as AppDynamics and New Relic already do a good job of collecting the relevant data at a reasonably low cost (operational overhead, configuration etc.). New Relic has also recently announced the addition of a platform, Rubicon, which allows one to perform in depth analytics on all the data collected (though currently New Relic do not collect distributed tracing data.

I refer to this capability as “Application Insight” and while this space will continue to evolve it does not exactly provide the next big step forward for APM vendors.

When I consider what I want from an application performance management solution I most certainly want some level of autonomic behaviour. IBM coined the phrase “Autonomic Computing” way back in 2001 (they did bugger all with the research worth talking about but hey, that’s IBM for you!) and they defined autonomic computing as having four functional areas:

The thrust of the concept is that systems should apply self-* principles to make intelligent runtime adaptations to the system behaviour. I call this “Application Intelligence”

Colonel John Boyd was a United States Air Force fighter pilot and consultant to the Pentagon. Boyd hypothesized that all intelligent organisms and organizations undergo a continuous cycle of interaction with their environment. Boyd breaks this cycle down to four interrelated and overlapping processes through which one cycles continuously:

“Application Insight” gives us the capability to apply the Observe, Orientate and Decision process while “Application Intelligence” gives us the capability to apply the Action process. In the context of todays APM solutions, the action process is applied via the same mechanism through which application metrics are collected. That is, the same runtime code instrumentation that collects application metrics at the “edge of the node” can be used to modify the behaviour. I’ll explain this by way of a couple of examples.

Lets consider a very simple request from a client to a service. This request represents a client invoking a RESTful service and awaiting a response. 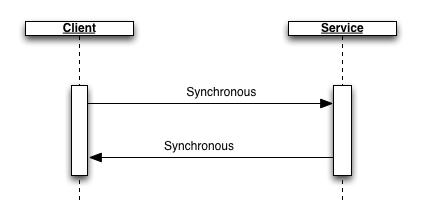 It is well understood that in order to prevent the client continuing to wait for a response when the service is not responding in a timely fashion, the client should implement a request timeout. The request timeout is typically set based on some expectation of service or prior knowledge of service behaviour. The process of deciding what an appropriate timeout should be can actually be quite difficult. Indeed, it may also be appropriate that the timeout change over time.

Now lets consider applying APM and the OODA loop to the problem of deciding an appropriate timeout for the service call. We already know that APM solutions gather metrics on service response times and error rates. This gives us the information to allow us to apply some basic heuristics to determine an appropriate timeout for the service call. The heuristics could be the following:

This provides a degree of self-optimization and therefore active management of the application performance.

Lets continue with a second example.

It comes as no surprise the applying APM and the OODA loop to the problem we can implement the Circuit Breaker. The heuristics could be the following:

This again provides a degree of self-optimization and therefore active management of the application performance.

Handshaking allows the service to throttle requests in order to protect itself. Based on some measure of load, the service automatically rejects requests with a response such as a 503 service unavailable if the load is beyond what the service can cater for. When load returns to normal, the service starts to accept requests once more. The heuristics could be the following:

So this stuff is not exactly novel. Michael Nygard has documented the above patterns in his book, Release It!. Netflix have implemented these patterns in their Hystrix library that they have made open source.