Today in business, we are seeing with more and more regularity that the young upstart is out manoeuvring the established players in multiple verticals. In the automotive industry we see the established players looking over their shoulder at companies such as Tesla. In banking we see new and innovative funding models as well as a relentless drive to reduce transaction costs in the area of payments. And in entertainment we see low-cost streaming services disrupting the TV, film and music markets.

The reason we often hear cited is that incumbent players have grown fat of the land and now they are slow and cumbersome, unable to adapt quickly to evolving market demands. Some of that fat takes the form legacy systems that have become behemoths over the years.

It’s easy to defend most of those legacy systems. They work and they have been working for years. They often enforce business rules and logic that have been forgotten, even by those with the longest tenure. They don’t cost anything either because most of the cost has been incurred years ago. That is of course unless you want to change them…and you will!

Many such systems are the heartbeat of their organisation and as such they are changed with much trepidation. Most of those who knew the system well have left the company, retired or are at one with their maker. Those who remain are as lethargic and expensive to maintain as the system themselves. So what options are left? One such option is to build a facade using Domain Driven Design (DDD), Change Data Capture (CDC) and Command Query Responsibility Segregation (CQRS).

There are a couple of significant characteristics of this approach. The first (which may be a bit obvious) is that the source of the events has to explicitly publish the event. The second is that consumer has to explicitly consume the event and possible store the information of interest locally (because there is no way to pull the data). The third, and most important, is that by employing this approach we have increased the inconsistency window (more on this later).

I’ve said that the source of events must emit events on the occurrence of a something significant. But I’ve also said that legacy systems are expensive to change and are changed with significant risk. So how do we modify the source system to emit the events?

One way to achieve this without changing the system is to capture data changes using change data capture tools which in turn publish the domain event. Typically, CDC tools monitor database updates and on detection of a change that is of interest they publish the event to a messaging system. Some CDC tools can perform the change detection with relatively low overhead and so impact on the legacy system is manageable.

But what do we do with those domain events?

What is now possible, is that we can create local data sources and synchronise those data sources through consumption of domain events. The fraud detection system, the ledger system and the personalised offering system all have their own local copy of the data and can operate upon that data without much consideration of where the data came from or who else is using the same data. This is the Query part of CQRS…but what about the Command part? 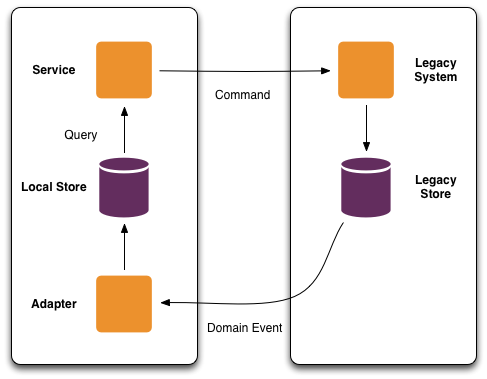 The other option is to expose a facade in front of the legacy system that clients call to invoke a command. The advantage here is that the facade can expose a synchronous or asynchronous interface whereas domain events are inherently asynchronous.

Whichever Command approach you chose opens a new possibility. That is enriching the service offering of the legacy system. For example, I could implement a facade that allows me to limit spend on transaction types. Wouldn’t that be cool? Your bank manager is actually stopping you buying a round of drinks when you’ve had one too many!! And you didn’t have to change the legacy system. Say hallelujah!!