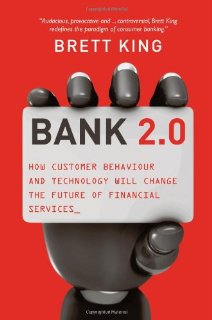 We are all aware of the devastation that has occurred over the past few years in the banking sector. This has had a profound effect on the banking industry as well as on the people who have trusted this industry to safeguard their hard earned cash and retirement plans. People are more skeptical of the banking industry and are becoming more demanding of the services it provides.

Of course, this skepticism is not all down to the banking crisis but can also be attributed to the way people’s behaviours have changed over the last decade or so. These changes are primarily attributable to the internet and/or the demands modern living places on people’s schedules.

On the recommendation of a colleague, I picked up a copy of Bank 2.0 in which Brett King uses his extensive knowledge of the banking industry across the globe to explain why a paradigm shift is imminent in the banking industry and what banks are doing (or should be doing) to prepare for the challenge.

Brett delivers a concise lesson on the psychology of consumers in the age of internet, mobile and 24 hour access to services. He describes how recent (1995+) innovation has trained customer’s to be more demanding, has enabled them to be more informed and has empowered them with more choices should they decide that their current service provider (Bank) is not listening to them.

A banks traditional organisational structure does not support this new vision because it is centred around the branch and all that it is. But the relevance of the bank branch is changing and Brett demonstrates his understanding of the historical factors that underpinned this organisation and why they no longer exists. Dr. Carl Sagan said ‘You have to know the past to understand the present’ and Brett provides an excellent narrative of the history of traditional banking.

Brett discusses the channels that banks are, or should, be leveraging today.

This begins with a discussion of the traditional branch network, the history of branch closure, and the reinvention of the branch as a sales and service (as opposed to transactional) channel. Littered with example’s of approaches taken by many of the worlds banks (they are named which makes it easier to identify with the examples) I found this narrative highly engaging.

Call centres, which we all know (and typically detest), are dissected and the customer experience with call centres (and contact centres in general) are covered in great detail. Brett covers the problems that institutions meet when attempting to leverage IVR (interactive voice recognition) and other communication channels such as Instant Messaging, VoIP, Social Networking. These problems seem very familiar as they receive significant media coverage but the analysis and suggested solutions are very insightful.

I noted a quote from this section that struck a chord. It was ‘The culture of service needs to start at the top and filter down through the organisation every day.’ I think this is something that should be replicated in everything a company does, both internally and externally.

Brett next discusses the Web channel and the historical view of how the web should be leveraged by banking institutions. He describes the disservice that this view pays to the channel and customers alike, why this view is just plain wrong, and how to approach changing the Web channel to a more customer oriented channel can benefit both the customer and the bank. This is great stuff but as Brett points out, it’s a step change for many of todays banks who still hang on to traditional revenue accounting practices that lead deluded bank executives into prioritising the branch network over and above other channels.

The mobile channel is the one that we are all getting excited about and the challenges to traditional banking are there for all to see. More and more we are seeing non-traditional players offering mobile banking services, unconstrained by the baggage carried by most traditional banking institutions. I particularly enjoyed the interview with Steve Townend who’s opinion was refreshingly honest, direct and unapologetic (reminded me a little of Michael O’Leary). Here are two quotes that resonated with me:

“Banks have cost cut to the extent that most of their infrastructure is shot and the demands of their stakeholders for short-term profits renders them almost impotent when it comes to innovation - the banks get rewarded for sustaining the status quo. Innovation is not simply repacking an existing product in a new way.”

“Banks are too biased towards creating shareholder value, rather than creating value for customers.”

I think there is potentially another book if one were to expand on both these quotes!!

Automated Teller Machines (ATM’s) have been around for a long time (40 years) but how are they going to evolve as the retail banking world changes? How can they be made more consumer friendly and how can they be leveraged better as a channel? These questions are answered in great detail with interesting examples and case studies of how different banks view their ATM networks now, and into the future.

To conclude this section, Brett then offers his opinion on where banking and channels are going (or should be) and suggests a way to get there. It does read a little like a marketing campaign message but I have to say, I like the sound of what Brett is selling!!

Part 3 - The Road Ahead: Beyond Channel

The rate of change in technology adoption is explored in an attempt to emphasize the urgency with which banks and financial institutions should realign their operation’s to meet the expectations of today’s consumers. It is possible to view this as just scaremongering but the experience of the past is a good indication of what lies ahead. Brett reiterates Bill Gates’ famous quote ‘Banking may be necessary, but banks … we’re not really sure about those.”’

Technology has changed people’s lives more than we could have imagined even 15 years ago and we are given an insight into some of the research occurring today, that might change our lives tomorrow. Interesting stuff, but I’m still undecided if it’s a little off piste.

It’s very clear that advertising has been changing rapidly over the past 10 years or so. More than that though, people’s tolerance of mass marketing campaigns is close to zero. As a result, advertising has to become more personalized to increase its effectiveness and reduce the chance of alienating your target audience by bombarding them with irrelevant messages.

Finally, Brett concludes with a summary of what Bank 2.0 means for the consumer and the bank alike. He presents a Bank 2.0 Road Map and likely projects to undertake along with a suggested time line. Most importantly though, he stresses the need to engage with customers through new media or eventually become irrelevant as you are overtaken by banks who have.

Brett presents the material in the form of a very engaging story, describing the past, present and future of banking in a way that I, as a customer and someone who works in the industry, can relate to easily.

The case studies throughout the book are very engaging and informative. They help in understanding how banks are reacting (or not) to the needs and/or demands of the consumer. Naming the banks and allowing the reader to identify them makes the material more engaging than if the subjects of the discussions remained anonymous entities.

I thoroughly enjoyed reading this book, found it highly thought provoking, and would recommend it as a must read to anyone in the banking or finance industry or indeed interested observers/consumers.